About a week ago CT DEEP's Rebecca Foster discovered a cool oddity among the several Piping Plover nests at Milford Point. Take a look at this photo, right in the center, where there is a small depression. This nest has five eggs in it! 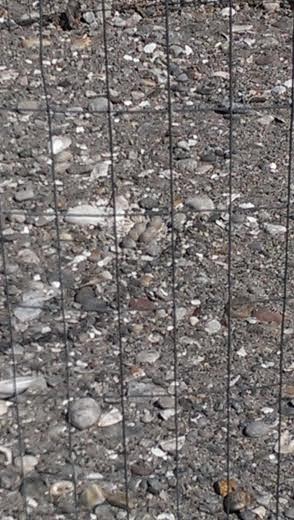 Piping Plovers lay four-egg nests almost 100% of the time. When they have completed the four-egg nest CT DEEP goes in to add a predator exclosure, the metal framing you see in Rebecca's photo above. In this case Rebecca says she exclosed the nest when it had four eggs, as usual, and the birds ended up laying another one. In all her summers of working with the Piping Plovers in Connecticut she had never seen this before.

Audubon Connecticut Field Technician Sean Graesser tells me he knows of at least a pair of birds on Long Island in the past that had a six-egg nest. Suffice it to say we are all very intrigued as to how this will turn out. Will all of the eggs hatch? I am guessing no but if they do seeing mom and dad running around with five little ones would be entertaining.
Posted by Audubon Alliance for Coastal Waterbirds at 9:59 AM