After discussing the Sprague's Pipit turned Horned Lark back in this post I wanted to provide a little more information on the latter bird since it is one of the Audubon Alliance for Coastal Waterbirds target species. Like so many of our coastal birds, the Horned Lark is a species of open habitats, from the dunes of a beach to mowed grasses of an airport to a weed-filled driveway to farm fields and dirt patches. These are probably the only places one would find them inland, and a location like Bradley Airport or Rocky Hill Meadows, like the bird above, is a great spot to watch. When you get to the coast you will be able to find them in nearly any beach or open (not forested) coastal preserve, like the Coastal Center at Milford Point, Stratford Point, Seaside Park in Bridgeport, Hammonasset State Park in Madison, Griswold Point in Old Lyme, Sandy and Morse Points in West Haven, and many more locations. Here are a few photos I've taken of them over the years. 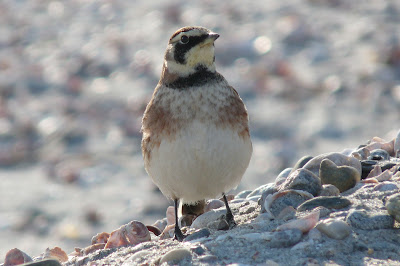 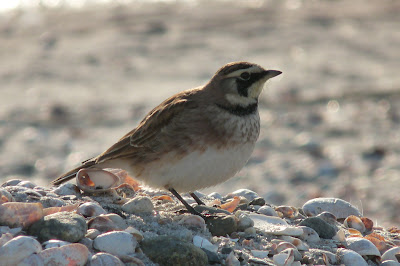 However, you are very likely to find them in our state in only the late fall, winter, or early spring, and if you ever do find Horned Larks in or around the breeding season, we and the Connecticut Department of Energy and Environmental Protection would love to know as they are listed as endangered in the state. Nevertheless, from around October through March you can expect to see them occasionally in some of the mentioned areas. They will form flocks, often with Snow Buntings, and zip around the coastline in search of food that consists mostly of seeds from grasses and weeds. If we experience a heavy snowfall, watch for melted snow from the sun on pavement that exposes plants, or any patches made by snowplows, as these little spots will often draw in the birds. 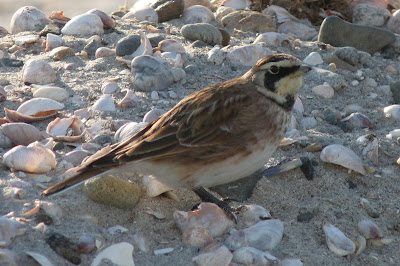 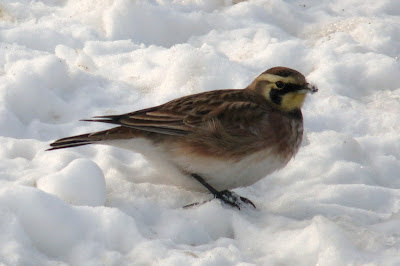 Apart from finding food, these flocks also help to provide protection from would-be predators such as those pesky yet enthralling Peregrine Falcons that remain in the state year-round. They are seen hunting for birds on the beaches very frequently during the winter as they know the warmer areas near Long Island Sound will harbor many different species like this one. The bird below was a female at Long Beach in Stratford in January several years ago. 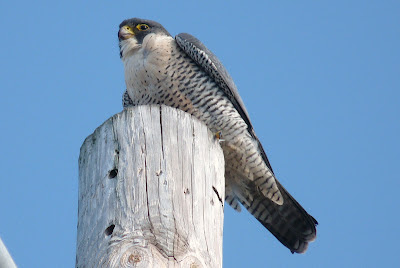 We would love to have any sightings of Horned Larks that you can find in the next several months. If you would share an eBird checklist with us that includes them that would be wonderful. Alternatively, you can send us an email and let us know about them and other lingering shorebirds or long-legged waders, a group of birds that seems to hang on in Connecticut throughout our increasingly warm winters more and more, and I'll discuss that further in an upcoming post.