Patrick Comins had a Western Willet yesterday afternoon at the Menunketesuck Island flats, highlighting a trip where he also spotted a dozen American Oystercatchers and the first of season Dunlin. Take a look at the very crisp photos he snapped of this individual. 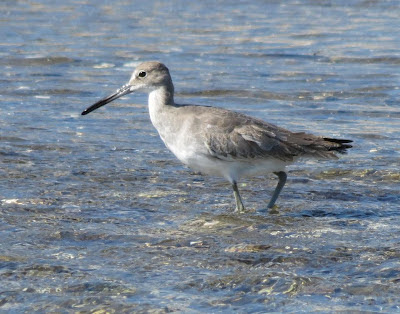 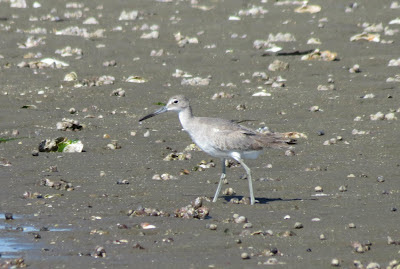 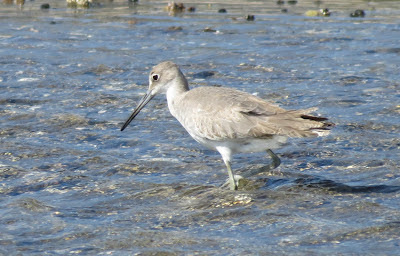 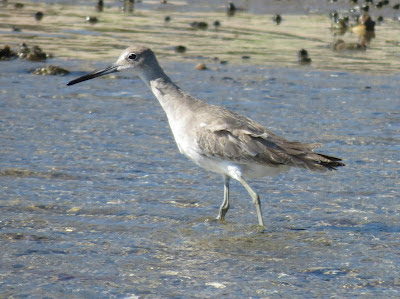 This is a subspecies of the Willet, and there is no better explaination on it than this passage from The Birds of North America Online:

This species is composed of 2 disjunct breeding populations differing in ecology, in morphology, and subtly in vocalizations. Populations breeding in inland, primarily freshwater habitats of western states and provinces belong to the subspecies Catoptrophorus semipalmatus inornatus or Western Willet. Populations breeding in the marshes of the Atlantic coast, from New Brunswick to Tamaulipas, belong to the subspecies C. s. semipalmatus or Eastern Willet. The two breeding environments differ in several characteristics. Eastern Willets often have abundant food resources but limited nesting habitat, while Western Willets often have abundant nesting habitat but unpredictable food resources, depending on wetland availability and drought. Ambient sound also differs between the breeding areas of the 2 subspecies, and this has resulted in a divergence in “song” characteristics. The song (“pill-will-willet”) of the Eastern Willet is emitted at a higher frequency and more rapid repetition rate than that of the Western Willet. Calls of both subspecies sound very similar to human ears, but Eastern Willets do discriminate between male songs of the 2 subspecies, responding preferentially to Eastern song. Western Willets tend to be larger and paler than Eastern Willets, with less ornate barring in their breeding plumage. These are average differences, and the 2 races overlap in these morphological characteristics.


Patrick mentions on our Facebook page that he identified it by the long, two-toned bill and very pale color, as the overall body colorations are much lighter on Western Willets. He also mentioned the larger size which may not be apparent without a size reference but is always easy to see if you have experience looking at all of the Eastern Willets filling habitats like Stratford Great Meadows Marsh and associated areas each year, a great place to visit to examine "our" birds up close during the breeding season.